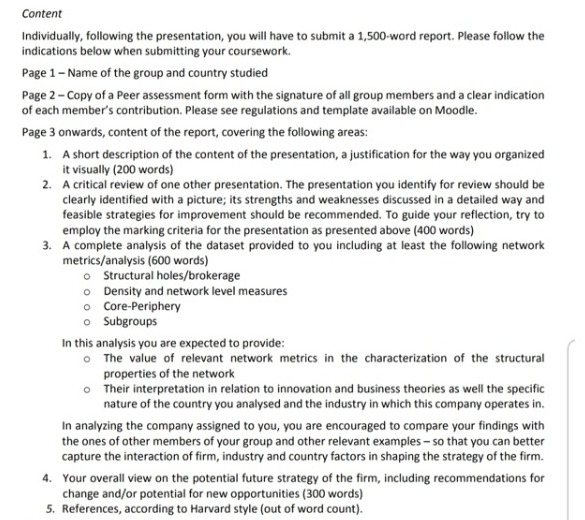 The presentation consists of the details about operations and innovation strategies of companies in Japan. The deck starts with the overview of technological companies and the PESTEL analysis for foreign companies which includes high corporate taxes, natural calamities probability, political ties, etc. It then goes on to describe the market entry strategy options for foreign companies, which could be through active market research, relationship driven partnerships, or quality-oriented product innovation. Companies have dedicated website with detailed product information and they have an interpreter for basic self-introduction and as a reliable contact point for delivering satisfactory customer service. The whole process of product marketing information is conducted to communicate appropriate messaging to the customers. There is an example of social network analysis given in the presentation, which describes the degree centrality in terms of size and colour.

Now, we have discussed steps for operating businesses in Japan. The four elements of the Japanese National System of Innovation are discussed thereafter –

Many foreign companies have contributed in innovation till date. High success rate and supporting ecosystem such as co-working spaces and accelerators have led to the increased FDI in Japan.

Market Knowledge and pricing strategy could be the strengths for a company, whereas high competition and increasing internal cost could be the possible weaknesses. New market and new technology pave the way for a business opportunity, while language barrier and lack of knowledge before market entry could be possible threats for the company.

USA has been described as an innovation friendly region, as it –

This can be seen in the way that the Innovation System of USA is being boosted by superior technology, skilful training, and sufficient financial support.

The topic “Investments in the USA” is not resonating with the content of the page, along with the below given figure of 10 most populated countries of the world. The triangle of success for innovative firms is based on the global trade agreements, economic, geographic, and productivity growth.

Business environment of USA Innovation System has been described as positive due to high risk-taking ability, talented managers, and adoption of ICT system. The regulatory environment also has a very positive attitude towards innovation systems, for example open market availability to any new entry player, transparent tax policies, encouragement of intellectual properties. The Innovation environment has been described with the help of encouraging Infrastructural support and US federal government support.

Due to these conducive factors for all types of environments of innovation systems, USA has been the largest consumer market in the world, and they have the best infrastructure for innovation, due to which their number of patent counts is the largest globally.

The given presentation document has been very well framed in the way that it has tried to define the associated environment systems for innovation strategies, and how they positively impact the USA innovation system, resulting in a very large FDI and conducive local business environment.

However, it could have included a comparison plot between USA and any developing country (say India) and how things are different in both countries. It could also have been represented that whether the rate of FDI has slowed down over the years or not.

Part 3 – Analysis of the Network

Part – 4 Recommendations and future strategies for the company

Part 3 – Analysis of the Network

Centralization in Social Network Analysis refers to the most important node in the network, around which all the other connected nodes are associated and the whole network is built. It relates to the overall cohesion of the network

Degree Centrality is an efficient way of measuring influence power of a node as it represents the number of connections one node has with other nodes. It is calculated by assigning a score based on the number of links held by that node. Degree gives us the no of direct connections that a particular node has with other nodes in the network. In the above given figure, the considered corporation Tokyo Institute of Technology has 4 direct connections and hence its degree is 4, out of which Nagoya University has the highest degree, which can be seen by its larger size.

Betweenness gives the shortest path between any two-individual pair of a network. The betweenness centrality gives the number of times the considered node acts as a bridge or a connecting medium along the shortest path between two other nodes. The formula used for calculating between distance of the nodes is [(n-1)*(n-2)/2]. In the above figure, BASF SE, National University Corporation Nagoya University, and Mitsubishi Materials Corporation act as bridges between nodes for the considered corporation.

Closeness Centrality helps in segregating the individual nodes on the basis of their effectiveness in influencing the entire network in the minimum time. It is based on the average length of the shortest path between the chosen node and every other node in the given network. The cluster in the above given figure has high closeness within the cluster, which can be seen by minimal difference in size of the squares for the direct links of Tokyo Institute of Technology.

Eigenvector centrality measures a node’s influence on the basis of no of direct links it has to other nodes within the given network. It also measures the strength of the connection and the no of links connected to the directly connected link. It is helpful in measuring the influence of nodes on the entire social network. Tokyo Institute of Technology has a very low Eigen vector, and all of its direct links have negligible Eigen vectors, which can be observed from the above figure.

It gives the connection quantity of nodes in the way they are connected to each other in a given social network. In the above given diagram, there are total five types of connections, as depicted by 5 different colours.

It is an iterative algorithm for finding out cohesive subgroups in a given network. It gives the idea about the closeness in the common goals and follows the block modelling process. The above figure is done for partition within 6 to 10 clusters. It produces measure of the goodness-of-fit of the configuration for the given no of clusters, and there can be more than one division possible.

Effect size helps in measuring the strength of relationship between two nodes of a network. The effect size of Nagoya University is the largest in the direct links of Tokyo Institute of Technology.

Constraint relates to the difficulty in building structural holes within the given nodes of a network.

In the above given network, we can see that National University Corporation Nagoya University has a better potential than its parent corporation Tokyo Institute of Technology in building the structural holes.

Part – 4 Recommendations and future strategies for the company

Tokyo Institute of Technology has been the best science and technology institution of Japan for many decades. They follow a wedge shaped style education, which allows students to understand the depth of science and technology and its impact on society, along with providing the ability to hone skills while learning independently and creatively. They want to develop human capabilities at a higher level through pioneering research and education facilities. For achieving this mission, they need to inspire students to acquire not only scientific expertise but also expertise in the human ethics and liberal arts, along with a balanced knowledge of social sciences and business intelligence.

The given corporation envisions students for possible academic paths with diverse choices based on the interests and pursuits. However, language barriers could be a deciding factor for international students for post graduate and doctoral programs, because even though the whole course is taught in English, yet there will be a minimal requirement of competence in Japanese. Bachelor programs have even lesser diversity, as all the lectures other than GSEP are taught in Japanese, which affects the enrolment of non-Japanese students.

Though Tokyo Institute of Technology has some talented faculty members and intelligent students, who have achieved wonderful results in the past, the corporation is right now struggling with the diverse background students with different fields of research. It could be improved by providing optional languages for lectures other than Japanese. It will also encourage non-Japanese faculties to join the corporation, which could possibly increase the number of patents and researches for the institute.

Looking for best Statistics Assignment Help. Whatsapp us at +16469488918 or chat with our chat representative showing on lower right corner or order from here. You can also take help from our Live Assignment helper for any exam or live assignment related assistance