Write a 2000 Words Research Proposal on :: Are Students Distracted by Cell Phones During Class Time.

Make sure it includes the following:

3) Why you chose this topic

4) Clear statement of population and sample

6) Whether each variable is categorical (qualitative) or numerical (quantitative).

7) You will need to describe how you plan to collect data. If you State clearly what type of sampling strategy you will use. Be so specific that I could go sample in exactly the way you do by following your instructions.

8) If you are surveying, include the question(s) or survey sheets you will use

9) Why you think you deserve extra credit (see below)

10) Put all your materials, including the grade form and planning sheet, in a folder.

Hypothesis: Are Students Distracted by cell phones during class time

The study that we are trying to take on here mainly depends on the age-long problem that had continuously plagued us since the advent of the electronic age and when the cell phone became a very well-known device that is present in almost every household and with every person. The study that we try to tackle here tries to look at a much more intricate and root cause or a root level of the problem, the level of children. As we already know the grip of a cell phone is highest at the lowest age group as they have become much more tech-savvy and comfortable than their older counterparts. Mobile Phones in colleges and even in schools have become a very commonplace sight nowadays with people starting to get the hang of and start using the cell phones of their parents even when they are babies. I took this hypothesis because though this is a question that is so simple that it might be overlooked sometimes but it is proved true will result in a fundamental shift in the basic foundation of people in which it is heavily believed that mobile phones and many other such electronic gadgets with the plethora of information that they bring to your fingertips heavily help you to become much more knowledgeable and smarter. Though my research will in no way try to refute that a mobile phone if worked purely for educational purpose acts as a very strong enhancer but it will try to bank on the fact that it is most of the cases acts as distraction with people generally browsing unrelated sites that not only creates visual distress but also results in taking a much more time than it would have taken had the person not used the cell phone at all. Thus, giving a brief overview of the research let us dive deeper into it

To start off with our research, we collected data from a survey that we conducted and created a thorough analysis of the same. Let us go into a little more detail for the same.

We decided to do this survey in a situation that actually contains our prime target the students, so we took two sections of the same class and challenged them with the same test on the same subject that they had to give in the same time. However, one of the section was informed that they can use their mobiles in the class while the exam is to be given while the other section was said that it would be an exam that will be totally devoid of any sort of online methods and they need to actually study and memorize things if they want to do good in the exams. We decided to take a random sampling of about 30 odd students from each section which acted as the representatives of students relying on the mobile and the ones that are devoid from it.The population here consisted of the student’s community as a whole which is divided into the above mentioned two sects whereas the sample was the small group of 60 people that we took. However, this test fails to take into consideration if there is a disproportionate number of studious students in one of the sections.

We communicated the above-mentioned rules to the classes well before the exams and though there were stray complains from the class devoid of any online sources as being the scapegoat in the event there was not much hitch in the event, and the exercise went ahead smoothly.

There were two sections of the class. Both the sections had 30 students taking a subjective exam with one of them having as access to mobile phones whereas the other did not have any access to the mobile phones. The topics required to be studied for the exam were already declared. However, the class with access to mobile phones could use those phones during the exams to see the answers on the phones and act accordingly. The exams were subjective in nature. The questionnaire given to each section after the results of the exams are as follows:

The section with phones:

The section without phones:

In both, the above question sets the students could have maximum marks of 100, and they rated the need and help of phone on a 7-point scale with 1 being the lowest and 7 being the highest.

The following is the collected data:

The section with cell phones:

The section without cell phones: 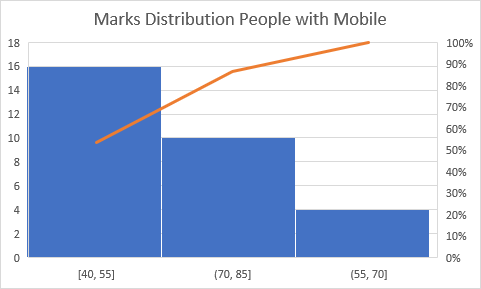 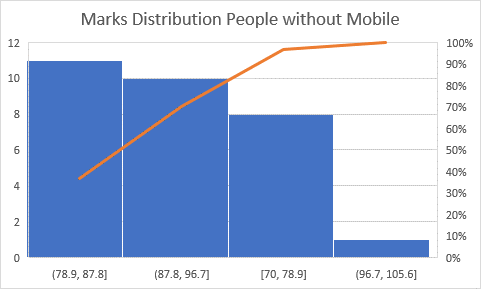 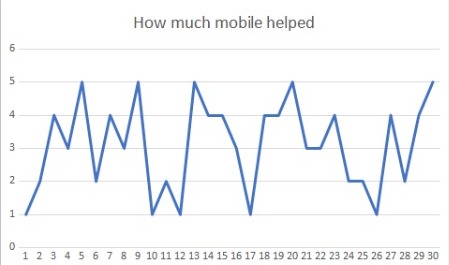 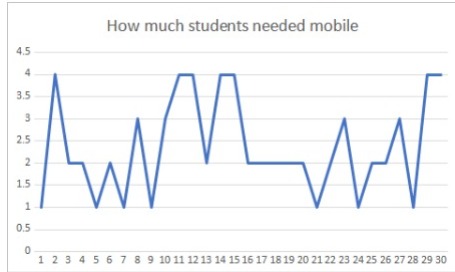 The following are the results of the test:

The next is the test where we check both the set of students weigh the use of cell phones equally. The hypothesis being tested is as follows:

H0: Both the set of students give equal weight to the use of phones

Ha: Both the set of students do not give equal weight to the use of phones

The following are the results of the test:

The p-value here is not low enough at a 95% level of confidence. Thus, we cannot reject the null hypothesis. Both the set of students seem to give equal weight to the use of phones.

Thus, instead of thinking that the presence of phones helps them the slot of students which had access to mobile phones did not score higher than the set of students who did not have access to phones.

To reiterate the hypothesis that we were talking about it was about finding whether the presence of mobile phones during the class times distracted the students as a whole. Though I had expected to find an overwhelming response leaning towards the much-touted hypothesis that the presence of the electronic devices and the billions of data in our fingertips has made us much smarter it was proved to be more or less a hoax. But the mentality and the conception did remain the same. It was clearly seen through the section which had to study and prepare before the exam did do much better as they were prepared for it, but both the section without knowing each other scores unanimously supported that the presence of mobile might have enhanced their chances thought the data might have been pointing otherwise. Though improvements in the study can always be made by using a bigger data set and by using multiple reviews as well as a much bigger set of questionnaires it is most implicitly proved that the dependence on the electronic gadgets and the helplessness in the lack of it is mostly a self-thought phenomenon.

Allen, Kelly (2014). ‘Mobile phones in the classroom: A helpful or harmful hindrance?’

Jounal of Medicine & Health (2013). ‘A Study on Some of the Common Health Effects of Cell-Phones amongst College Students’

Barnwell, Paul (2016). ‘Do Smartphones Have a Place in the Classroom?’

Looking for best Research Assignment Help. Whatsapp us at +16469488918 or chat with our chat representative showing on lower right corner or order from here. You can also take help from our Live Assignment helper for any exam or live assignment related assistance