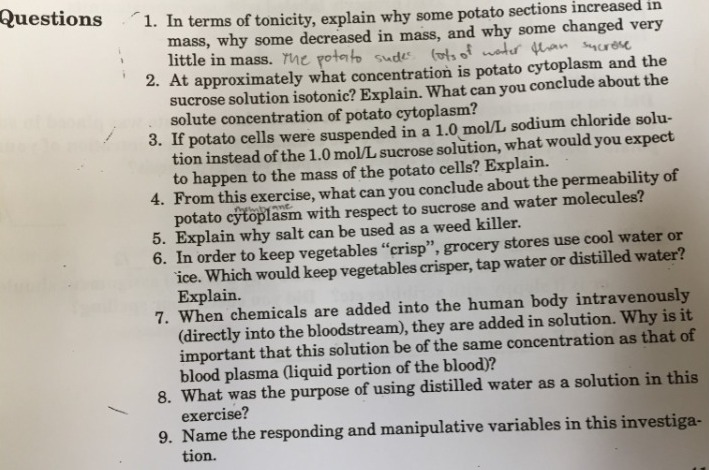 Potato contain more water percent as compared to sucrose solution and majority of weight gained by potatoes is due to water in it. So due to osmosis phenomenon the water in potato will leave to become equilbrium with sucrose solution. If concentration of sucrose will be low in the solution then potatoes mass will change less as it has more water in potato but if the concentration of sucrose will be high in the solution the potatoes mass will decrease as the water being in potato leaves it due to osmosis.

If the concentration of the sucrose decreases the weight of potato’s mass increases,as the solution is hypertonic.as the solute concentration decreases,the water concentration increases.The potato is naturally very low in sugars.although a potato contains three types of sugars;sucrose,fructose and glucose.Then also an average potato is less than one percent of sugar. water in a baked potato a large potato about 3-4 inches in diameter weighs about 299 grams.The water content for this size potato is 224 grams.That means,a baked potato has 75% of water content.

Salt makes the keaves hypotonic, rducing the turgor cellular pressure hich gives them support and ability to tranfer nutrients. Salt is use on some commericial plants to selectively kills weeds. Leaving the salt tolerant asaparagus for instance a Mediterranean native relatively intact. Salt poisons the soil the antidote is water which also leeches other nutrients and therefor weeds does not get a lot of nutrients to grow and nurrish and therefor salts are used as weed killer.

It is distilled water that keeps the vegetable crisp. Vegetable remain crisp because their cell walls are filled with water(turgidity)they become limp when dehydrated.Hydrating vegetable reduces dehydration,also plants can still uptake water even when removed from the soil for a long time.logically,the osmotic pressure will be reduced in distilled water,however unless comparing tap water with distilled water in keepung the vegetables fresh makes a little difference.

As this osmosis is processed on the phenomenon of osmosis,and since osmosis refers to the moment of water molecules across a memberane trying to achieve equilibrium.Because there are no salts in distilled water,there is a higher concentration of water molecules in the distilled water compared to inside the potato.Therefore water moves into the potato.

The experiment confimred that as the concentration of the sucrose become more diluted the potatoes will become more heavier in comparison to their prior firm this is because molecules of solvent pass through semipermeable membarne from a less concentarted solution into a more concentarted one as the osmosis defination says.

Looking for best Biology Assignment Help. Whatsapp us at +16469488918 or chat with our chat representative showing on lower right corner or order from here. You can also take help from our Live Assignment helper for any exam or live assignment related assistance