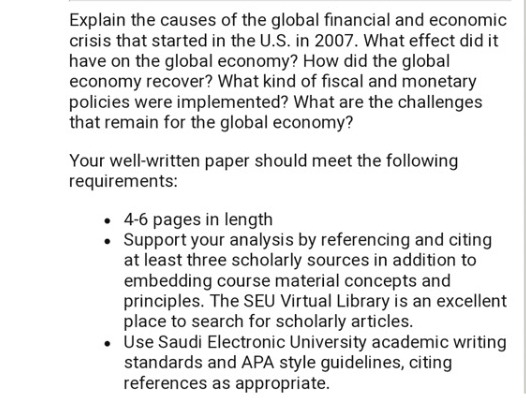 The great financial crisis that rocked thee= economy of the US during the year range of 2007 – 2010 was one of the biggest financial crisis to ever affect the world economy after the 1930 financial depression that had happened in the US. Its scale was so huge and extensive that it had the potential to completely destroy the economy of the world and bring all the workings in the world system to a complete standstill. It resulted in huge crashes across many highly reputed banks, a huge reduction in the growth rates of the countries, a complete reduction in the spendings of a huge number of individuals as well as a completely stagnated economy in one of the most pivotal countries of the world that resulted in n adverse effect to many other countries that were dependant on it. It was a clear and a very classic example of what vices like moral hazards and excessive greed can do to an economy and also the lack of regulation in order to strictly monitor and control the workings of the markets can lead to a complete downfall of a once thriving economy

The start of all this was an event that was called the sub prime crisis. It primarily began when foreign investors were looking for a way to invest their money that would garner them a good amount of interest. On thorough looking at the market that was best suited with the above-mentioned characteristics and requirements was the housing market of the US which was at a huge boom at that phase. The investors thus started to invest huge money into the housing market son US . Now the investors are not generally interested in the houses, and the mortgages of a singular person as that is really too small and trivial for the investors. In order to woo the investors, the banks started a new financial resource with collected a large number of mortgages and bundled them together into an instrument known as mortgage-backed securities and sold shares of the same to any investors who were willing to spend money in the housing sectors of US. Now in the previous times in order to give loans to a certain person, the bank would always do thorough checking if the background and the salary that the person can pay before approving their need for loans. However, with the huge demand of the housing mortgages by the external investors, the banks started to go greedy. As the demand increased more and more mortgages were required in order to make sure that there was a steady supply of mortgages that can be bundled together in order to make more instruments for the investor to invest in . The bank thus started to be very lax in the number of procedures that they took in order to approve a credit to a lender. This resulted in a huge number of people who would not be able to pay back the loans take up loans and get their own houses. They also started predatory models that would not check any sort of quality of the customer and would start off with a loan that the customer could pay at first soon to balloon to levels not payable by the. In all these happening that only thing that was positive and kept many players going was the high price of the houses which could be sold and the money retrieved by the bank in the worst case. This was also fulled by credit companies giving high ratings to this area. But this was just a bubble. When the rates of interest went soup that the people could not pay they started defaulting. This led to many houses getting free, and thus the supply increased drastically, but the demand also reduced which made the housing prices crash suddenly . Now all the investors, as well as the people who had bought the houses, lost the single most important thing that had held them in this area, and thus they stopped putting in any sort of money and giving up the houses in higher numbers. The banks and the investment companies thus fell in the between with no investors paying the money and huge amount of mortgages and loans still in their hands. This resulted in the crisis with many banks even of the size like that of Lehmann Brothers crashing and filing for bankruptcy, and things looked really bleak for not the only US but the whole world as a whole

This is where the government took up the reins. They created huge stimulus packages amounting to billions in order to bail out these banks and financial institutes. They swooped in the interior workings of the banks and publicly reviewed to make everyone understand which banks were still sound to be invested in and which needed more help from the government. The Dodd and Frank law was formed which create rules regulations and checks to make sure the everyday activities of these various banks were kept a heavy track upon and any sort of discrepancy and warning may be issued publicly as soon as it happens. This helped to slowly but surely get back some of the confidence in the Americal economy and saved the world from a global meltdown

Though many of these steps have been taken and the world now is much better than it could have been still many of the effects linger with a heavily decreased spendings in the US economy leading to effectively slowing it down and extreme caution put by general public on spending and more on savings thus reducing the cash flow in the economy. It also showed very clearly that even though we have a huge number of financial institutions and forecasting mechanisms they are still quite useless in front of a real crisis.

This was one of the most educating times for mankind, a lesson that mankind should never forget

Davis, Justin ‘Global Financial Crisis – What caused it and how the world responded

Looking for best Management Assignment Help. Whatsapp us at +16469488918 or chat with our chat representative showing on lower right corner or order from here. You can also take help from our Live Assignment helper for any exam or live assignment related assistance