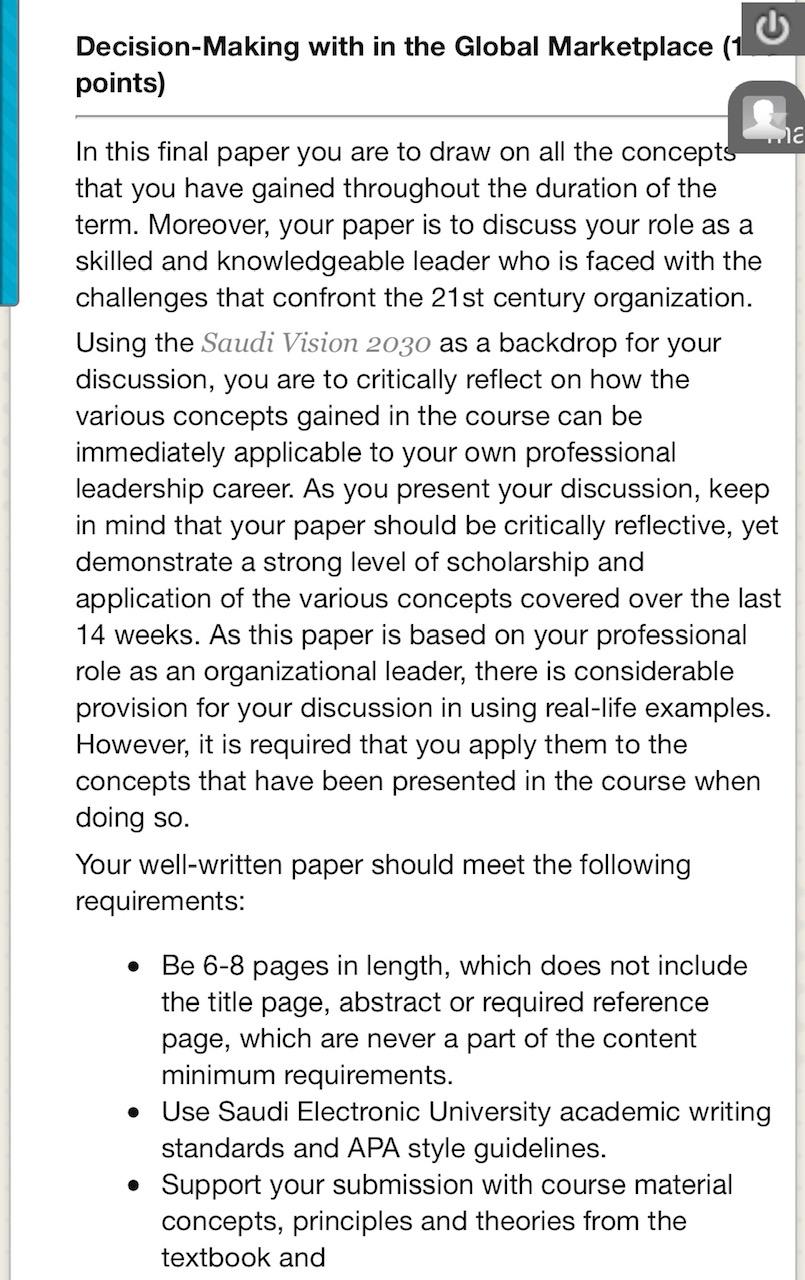 Decision making is key factor for any company to get sustainability in global marketplace. In any company it is a major responsibility for any leader to take important decisions in order to achieve the aim and objective of the company. The following reflective paper highlights different concepts of decision making from the perspective of a skilled and knowledgeable leader. This paper also highlights the challenges that have been faced by the companies of 21st generation. Specific organisation such as Saudi Arabian Oil Company, Saudi Aramco has been chosen for better understanding of this reflective paper.

As a marketing leader of Saudi Americo, I would say that sometimes it requires for the company to take directive decision making approach because, in certain situation it can be found that company is struggling due to lack of knowledge, skill and expertise of employees. Therefore, as the marketing leader it becomes my responsibility to take directive decision. In fact after implementing directive decision making concept in marketing operations of Saudi Americo, I have seen that my subordinates in marketing department are working with efficiency. As the reason behind this, I would say that I have divided the job and responsibilities based on their expertise.

In case of employees who are expert in negotiation I have decided to allocate them with budget planning job. On the other hand, employee with great public relation skill has been referring to the promotional job. After, taking this directive decision making skill in my department I have seen that marketing department’s effectiveness has increased. Employees are more flexible with their job. Above all it helped Saudi Americo to become world’s most profitable oil manufacturing company with producing and exporting 10 million barrels of oil in daily basis (bloomberg.com, 2018). Therefore, I can say that directive decision making approach of autocratic leadership has helped the company to get remarkable position in the global economy in terms of export and import oil business.

On the other hand, I have seen that Saudi Americo has faces issues in terms of choosing the best alternative solution from the wide range of solution. At that time other team leaders of different management department has implemented analytical decision making concept based on their analytical leadership styles. With reference to the view of Chimni (2017), I would like to say that analytical decision making helps at the time when it becomes critical to get best solution of a particular issue where already wide range of possible solution can be seen. Thus, from the other team leader of the company’s management department I have learned that while adopting analytical decision making concept they relies upon continuous observation along with statistical data in order to support their decision.

For example; at the time of taking make or buy decision in terms of whether to purchase Crude oil, NAPHTHA and fuels or making these within Saudi Americo, the leader of production department decided to critically analyse the cost effectiveness of both making and buying decision. After analyzing the cost of production and warehousing, production department leader decided to produce raw material within the company. Along with that I have seen that in the financial year 2017, Saudi Americo has gained  33.8 billion USD as net income by suppressing global market leaders like; Apple Inc., JP Morgan Chase & Co. and Exxon Mobil Corp (bloomberg.com, 2018).

From the above scenario I have learned that it is best to evaluate the situation critically based on previous data and statistical analysis in order to coming to a rational decision that would be beneficial for my company.

For example; when overall management department of Saudi Americo decided to get competitive advantage in global market by staying one step ahead of the competitors then, HR department chose to enhance the field of Corporate Social Responsibility which will provide the company more sustainable advantage in the long run global market perspective. Therefore, Saudi Americo decided to start new venture for unique kindergarten initiative along with child welfare initiative. This positive initiative of Saudi Americo has increased the value of the company up to 2 trillion USD (Saudi aramco, 2019). Therefore, from the above discussion I came to understand that effective decision making techniques of the management leaders enhance the chance for any company to get market leadership in context of global marketplace.

For example; when HR personnel of Saudi Americo found that in managerial function of the company employee participation was not appreciated or included then they decide to take introspective communication approach of behavioural decision making where leaders took initiative to communicate with each and every employee by encouraging and influencing them to provide their opinion without any hesitation. More importantly, I have seen that after taking behavioural decision making approach in leadership function Saudi Americo has seen increasing oil productivity that operates more than 90 countries globally by producing 98% of global crude oil (Saudi aramco, 2019).

Therefore, from the above discussion I have learned that leadership quality plays a major role in effective decision making process of the company. It helped me to gain knowledge about different decision making styles. Moreover, I have learned that based on scenario decision making strategy and approaches changes. More importantly leadership style and role of the leader should change depending on the core competency of the leader in order to take major decisions (As per the comment of Cumberland et al. 2016).

Looking for Management Assignment Help. Whatsapp us at +16469488918 or chat with our chat representative showing on lower right corner or order from here. You can also take help from our Live Assignment helper for any exam or live assignment related assistance.