The integral value greater than 6.08 and nearest to it is 7

The integral value greater than 97.28 and nearest to it is 98

Where, R=measured resistance at given temperature The pressure exerted by the air weight present at the sea level is referred as the absolute atmospheric pressure.

The absolute pressure is equal to the sum of the atmospheric pressure and the gauge pressure.

It is an arrangement of two springs below a metallic bar. The moving end of the spring is connected to the metallic assembly. As, the pressure on the mechanical assembly is varied, the spring either expands or contracts. This variation in pressure is reflected in terms of a moving pointer or an electrical signal. Phosphor Bronze, Brass, Beryllium Copper, Stainless Steel are normally used as the materials for bellows. The below diagram illustrates the same: In case of laminar flow, the velocity of the fluid at each and every point remains the same, the flow is smoother. Example- flow of water

In turbulent flow, the velocity of the fluid is different at different points and thus the flow isn’t smooth. Example- smoke out of a chimney

Bernoulli’s effect is used basically for pressure and velocity measurement in fluids, if the pressure at one point is known, bernoulli’s equation (shown above) can be used to determine pressure at the other location. A few examples are: venturi meter, orifice meter, pilot tubes, etc.

Now, as both the points are at the same height, thus the atmospheric pressure is same at both the initial point and the obstruction. Thus, the bernoulli’s equation reduces to:

As V1 is known, V2 can be obtained by substituting the other values. 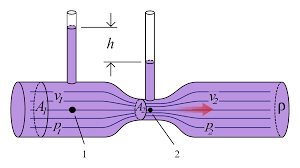 The modes of operation are basically referring to the operation of control systems during different conditions.

When the plant is operating normally, i.e, no constrains, then this mode is the Normal Mode of Operation.

Alternate mode of operation is entered during low power demand. It may occur due to reasons like:

a) reactor tripping or setback,

b) there is low power demand

c) turbine or generator might have lost connection to the grid, or

On decreasing reactor power, the transfer from the normal to the alternate mode takes place automatically when power drops below 2%.

The conditions which cause the shutdown systems to come into operation are:

SDS1 is designed to meet all the necessary safety conditions and also allow the reactor to be quickly restored to operational conditions within a time period of around 40 minutes. SDS2 is used as a backup for the case if SDS1 fails due to some unwanted factors. It is more extensive and would operate only if the operating period of SDS1 has elapsed.

RRS is needed because of the following reasons:

On the secondary side, roughly a quarter of water, injected through the feedwater system, evaporates and the remaining water is circulated back into the boiling region. This makes the water level unique. All of this is caused by varying pressure differences in the tube.

Looking for best Engineering Assignment Help. Whatsapp us at +16469488918 or chat with our chat representative showing on lower right corner or order from here. You can also take help from our Live Assignment helper for any exam or live assignment related assistance