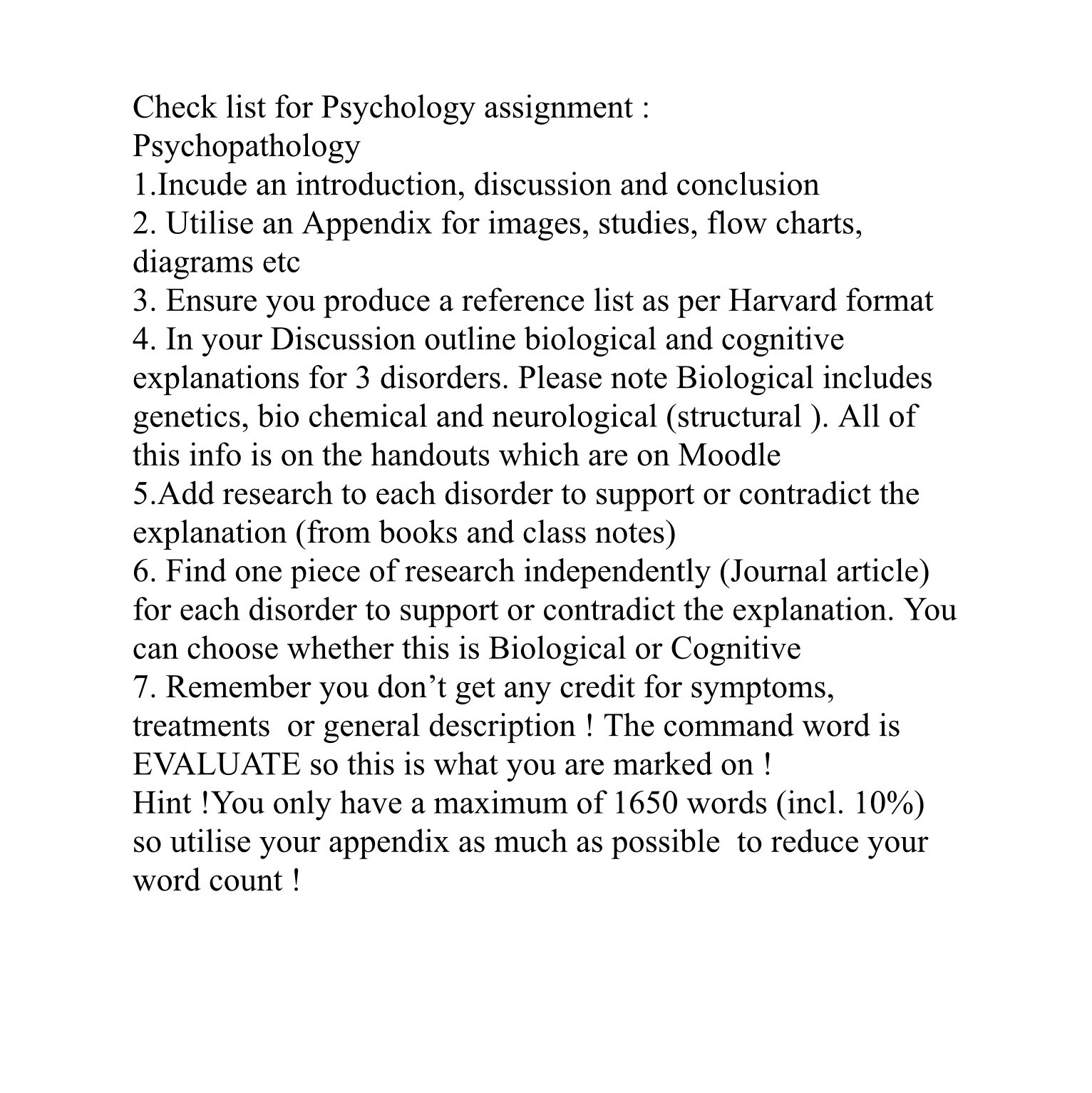 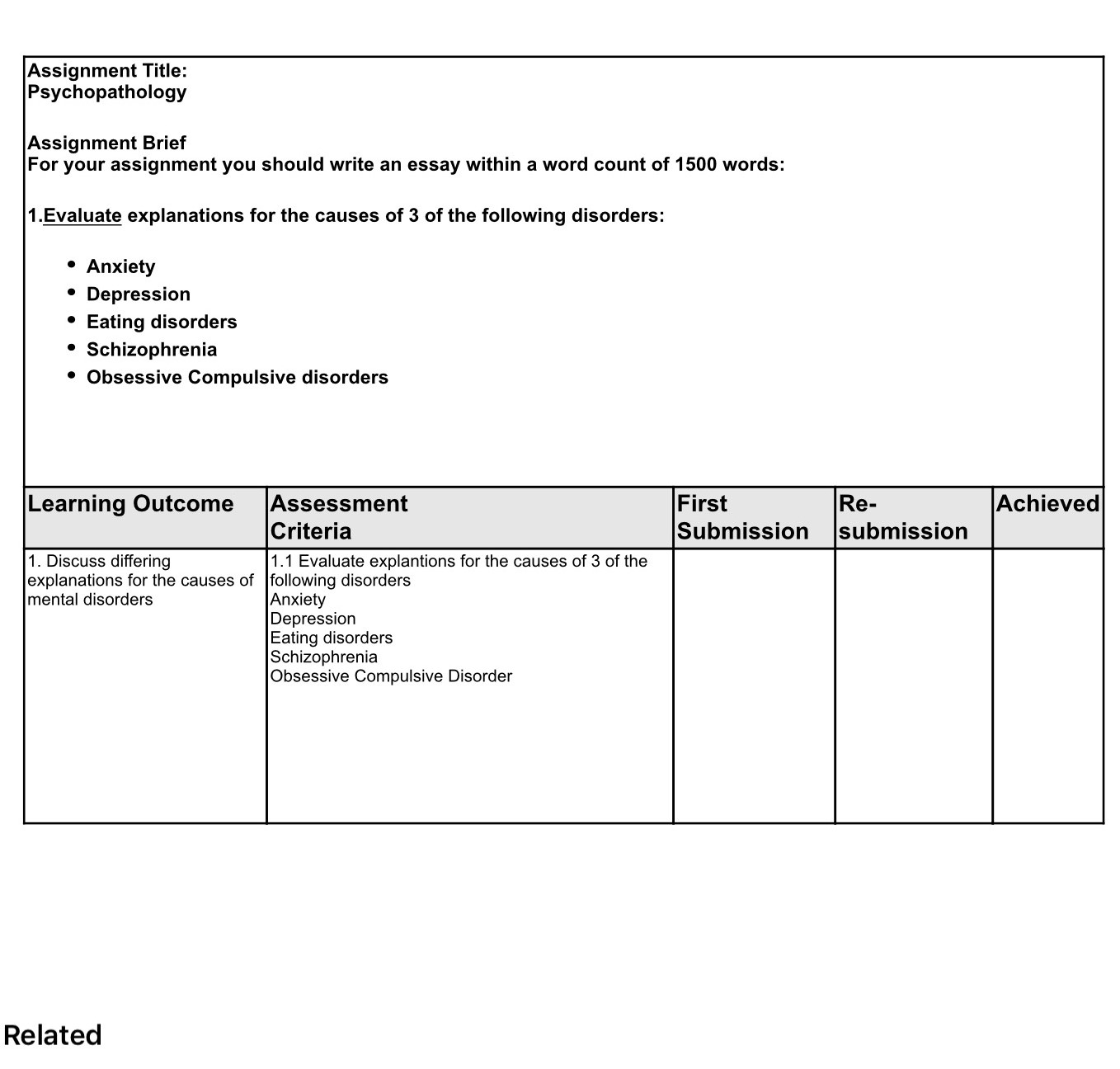 The following essay sheds light on the topic of psychopathology with three main disorders related to psychology – Eating Disorders, Depression and Obsessive Compulsive Disorder. The following write-up gives the cognitive as well as biological perspective of the three disorders mentioned above. The essay also gives a discussion related to the outlining points of the same. The essay concludes with the total overview of the three disorders in both biological and cognitive aspects.

This essay is getting developed for discussing the three disorders regarding cognitive and biological aspects and for highlighting the major risks associated with these.

The major risk factors involved with different conditions of Eating disorders like Anorexia Nervosa, Binge Eating Disorder (BED) and Bulimia Disorder are gender, age, ethnicity and family environment. In the works of Mayhew et al. (2018, p.12), three variants of the conditions are described. These are the restrictive gene variants, BED variants and people predisposing both the gene variants. Myriad gene determining studies including the heritability and linkage studies reveal a different picture for the same. The studies reveal Eating disorders are moderately to highly heritable. Linkage studies on chromosome 1p36-34 have more effect on community related effects of ED. On the contrary, the major revelation was that involvement of MC4R gene and 16p locus. The loss of function or deletion of the MC4R genes and 16p locus leads to hyperphagic obesity and the gain of the same results in restrictive eating. Genes coding for different characteristics of ED locating closely to each other causes occurrence of partial linkage disequilibrium resulting in more phenotypic expression of the symptoms of ED.

According to the study of Sabbagh, Mullegama and Wyckoff (2016, p.290), reveals the biochemical perspective of Human Eating Disorder. Various biochemical analyses reveal the role of Calreticulin (CALR), a calcium binding protein involved the role of the same in the transcriptional regulation. The role of VGF or VGF neuronal growth factor involved in the increment in the synaptic plasticity, memory and circadian rhythm is also vital. Again, Involvement of both CALR and HTR1 (HTR1 serine peptidase), a regulator of cell growth in human is also a major cause. The use of VGF as a candidate gene helps in revealing of both the above mentioned peptide derivatives as a cell growth regulator in obese patients, thus increasing weight, a phenotypic expression of ED.

According to the study of Hall, Vincent and Burhan (2018, p. 80).reveals the cognitive as well as the neurological side of Eating Disorder. The study, focused on the aspects of Non invasive brain stimulation and food cravings in the patients of ED. Through the use of repetitive transcranial magnetic stimulation the reduction of food cravings can be done. The studies reveal that extreme cases of Eating disorders can be a result of brain abnormalities the major abnormalities involved regions of brain are temporal lobes and grey areas. The altered flow of blood in the regions is also responsible for the increased food cravings of ED patients.

Depression is a very common psychopathological problem. The various aspect as well as various types of depression reveals the involvement of various genes for the different phenotypic aspects of depression.

As per the study of Smoller (2016, p.298), the various genes involved with the aspects of depression including panic disorders are mono aminergic genes (HTR1A and HTR2A). Along with these, the other important genes involved with the same are GABA receptor genes (GABRB3 and GABRA5) and several stress hormone genes such as CHR1. Panic risk alleles of 5 HTTLPR are also important in this context. Thus, stress related disorders such as depression and other psychiatric disorders are very much heritable. Twin family studies and linkage studies of the same also reveals the role of Serotonin transporter and Serotonin receptor which increases the intensity of the disorder, are sometimes the specific target of antidepressant medicines.

On the contrary, studies of Gold, Machado-Vieira and Pavlatou (2015, p. 207) reveals that the genetic aspects of depression are important. However, the dysregulation in stress system mediators is also an important aspect. The biochemical analysis of Depression reveals that melancholic and atypical depression are a result of dysregulations of stress system response increases the biochemical manifestations of Depression involving LC-NE systems. However, MAO inhibitors (monoamine oxidase inhibitors) reduce the effect of LC-NE systems, thus reducing the overall biochemical intensity of the condition including panic disorders. Again disinhibitions of stress mediators results in the increased manifestations of Depression including coronary artery disease and premature osteoporosis. However, profound use of Antidepressants can cause several side effects. As for example, the use of Serotonergic Antidepressants causes increased internal bleeding in the region of GI origin in particular. It also affects the other parts of brain and initiates cases of Subarachnoid Haemorrhage. Thus, the use of Antidepressant sin cases of acute depression is not generally recommended.

Another study by Ding et al. (2015), reveals that the major manifestation of Depression, suicidal tendencies, is influenced by the prefrontal cortex of brain. It also causes the increased psychological impact on the brain. Studies reveal that the Orbitofrontal cortex, which receives connections from Amygdale and Thalamus has high role to perform in the initiation of suicidal tendencies among patients of Acute Depression. It occurs by the corrupting information practices linked with the interconnections of the region increasing the risk of suicidal tendencies. On the contrary, the other regions involved with the condition of the same are some sub cortical limbic brain regions including the hippocampus and dorsomedial thalamus. Both the regions, along with amygdala assists in the increment of depression related conditions in Brain. The studies also explore to reveal that the decreased hippocampal regions and decreased amygdala core volume are a proper reason to increase the symptoms and etiology of the condition in the brain.

As per the views of Mattheisen et al. (2015, p. 338), the genetic aspect of Obsessive Compulsive Disorders reveals that the presence of genes is associated with Cadherin 10 (CDH 10) and Cadherin 9 (CDH 9). The presence of Cadherin clusters in the genetic aspect of Obsessive Compulsive Disorders is very vital. Another very important gene and crucial in the process is the DLGAP1 gene, a member gene of DLGAP 3 family is responsible for the neuronal post synaptic density complex of brain in the mentioned disorder. The mentioned genes have evidences which show the presence of increased OCD like behaviours. Other etiological manifestations of OCD can be attributed to genes like NEUROD6, GRIA4, SV2A and SLC1A2. The genes are also involved in the early development of the condition in the neuron of the same. Association signals can also be analysed from the same.

Another study from the Kocabicak et al. (2015, p.1050), reveals the neurological as well as the cognitive part related to Obsessive Compulsive Disorders. The condition is increased in the associative regions of mesolimbic system increasing the overall condition of the disorder to an enhanced level. The Dopamine and serotonin transmission is also involved with the same. On the contrary, the studies also reveal that compared to healthy individuals the patients with OCD have problems in rectal frontal gyrus and sub gyral area as well. The cognitive thinking capability of the patients get affected severely involving the temporal gyrus, parahippocampal gyrus, cingulate gyrus and extranuclear area. Anterior cingulated and insula region is also involved in the same and thus, cognitive part of the condition of Obsessive Compulsive Disorder affects the major parts of Brain. The chemical imbalance occurs due to the deficiency of Serotonin in the brain leading to abnormalities. The Serotonin Reuptake inhibitors (SRI) and selective serotonin reuptake inhibitor (SSRI) medications are the permissible suggestions for the recovery of the condition.

From the above essay, it can be concluded that the psychopathology disorders involving the aforementioned three disorders of Obsessive Compulsive Disorder, Eating Disorder and Depression are the very extreme conditions involving partial brain imbalance. The conditions are all genetically heritable and has influenced by the myriad genes mentioned in the write-up. Along with these, the conditions involve imbalanced cognitive thinking skills and other restrictions as well. The conditions also have biochemical reasons that lead to the manifestations of the etiological symptoms in excess, increasing the intensity of the condition.

Kar, S.K. and Choudhury, I., 2016. An empirical review on oxidative stress markers and their relevance in obsessive-compulsive disorder. International Journal of Nutrition, Pharmacology, Neurological Diseases, 6(4), p.139.

Looking for Biology Assignment Help. Whatsapp us at +16469488918 or chat with our chat representative showing on lower right corner or order from here. You can also take help from our Live Assignment helper for any exam or live assignment related assistance.