the rest of this paper, I aim at describing the current state of the art related to the LAA-LTE technology as being enhanced to work in the 5 GHz unlicensed band as a good neighbour for Wi-Fi. In particular, (related works) the paper is organized as follows

Explain the basic mechanisms proposed so far for a fair coexistence between LAA LTE and Wi- Fi.

In the past few years, the communication industry has seen rapid and staggering development in the fields of cellular and wireless communication. The growth has been tremendous, especially in the mobile data traffic and WiFi based data traffic. It is expected that in the very next year, i.e. 2020, world data traffic will be at 1000 times by what it was a decade ago. [1] Currently, Cellular communication is developing upon 4G LTE or Long Term Evolution, and it operates on a much wider spectrum than that of earlier technologies like 2G and 3G. Still, the staggering development of data traffic will be too much for this band to carry. For this, utilisation of unlicensed spectrum seems to be an effective solution for the cellular networks. LTE can utilise the unlicensed spectrum by two methods, which are LTE-U and LTE-LAA. The latter is mostly used in today’s smart grid based networks. LAA or License Assisted Access is the most favourable technology today which uses both, the existing 4G spectrum (which is licensed) and the unlicensed 5GHz spectrum. The 5GHz spectrum is mostly used by WiFi based data traffic and while increasing the capacity of LTE through LAA, there can be a great degradation of efficiency of WiFi networks. It is the best option for the 3GPP Rel-13 standard solution! There can be coherence and that can cause delays in WiFi network. So, there is a need of development of a coordinated model for both the networks which can increase capacities of LTE networks and also keep WiFi networks efficient. In this paper, analytical models based upon Markov chain will be used for analysis. They are based upon two WiFi schemes, which are DCF (Distributed Coordination Function) scheme and Cat 4 LBT (Listen-Before-Talk) scheme. The analysis shows that the degradation of the WiFi network’s performance can be enhanced by replacing WiFi Access Points with LAA eNBs (E-UTRAN Node Bs). Overall, you need a balance between both of these networks, you need a lower degradation of WiFi and higher speed of LAA based LTE. Through this, there can be a fair coexistence of both LAA and WiFi in the 5GHz spectrum. [2]

In the recent past, with the increasing number of smartphones, applications and most importantly IOT devices, the mobile data traffic has gone huge. The existing networks can only get dense with smaller cells is an effective method. Still, the frequency reuse isn’t a long term solution. This generates a challenge, a need for an effective solution to enhance the capacity of existing networks and there have been great innovations in this sector for increasing capacity. The existing technology of LTE got a wider spectrum when Qualcomm proposed to use the unlicensed spectrum of 5GHz with a WiFi enabled device. [3] Since then, the whole world is attracted to this unlicensed 5GHz band. The reason being easier accessibility, lesser use and greater spectrum of this band. The only problem is that in some incumbent systems especially WiFi networks will get degraded performance if co-channelling of LTE is done without planning out a coexistence scheme. [4][5]

The coexistence schemes which have been proposed by industry and researchers are numerous. Some of them are for the protection of WiFi performance like LBT (Listen-Before-Talk) scheme, upload power control scheme, subframe allocation scheme, etc. [6][7] In countries where LBT scheme is mandatory, (European countries, India, Chine, etc), there are two schemes, Cat 3 and Cat 4. Both of these use the same traffic driven contention based systems.

For the deployment of LTE in unlicensed spectrum, LAA is a global solution. For its deployment, we use a Markov chain to evaluate WiFi DCF (Distributed Coordination Function) performance.

DCF is a protocol which helps in reducing packet collisions, which can occur while co-channelling of Networks. It is mechanisms which work on Contention-based medium access. It is generally tagged by 802.11 and it is a CSMA/CA ( Carrier Sensing Multiple Access with Collision Avoidance). It is also a MAC or Medium Access control protocol. It uses a DSSS or Direct Sequence Spread Spectrum physical interface. It uses carrier sense to avoid any frequency collision by simply measuring the amount of energy received at each channel. If the energy exceeds a certain limit (a threshold), it is understood that another node is transmitting and the present node should be silenced now. The Markov chain model will be based on DCF scheme for WiFi and will also use the Cat 4 LBT scheme for LAA. [8] 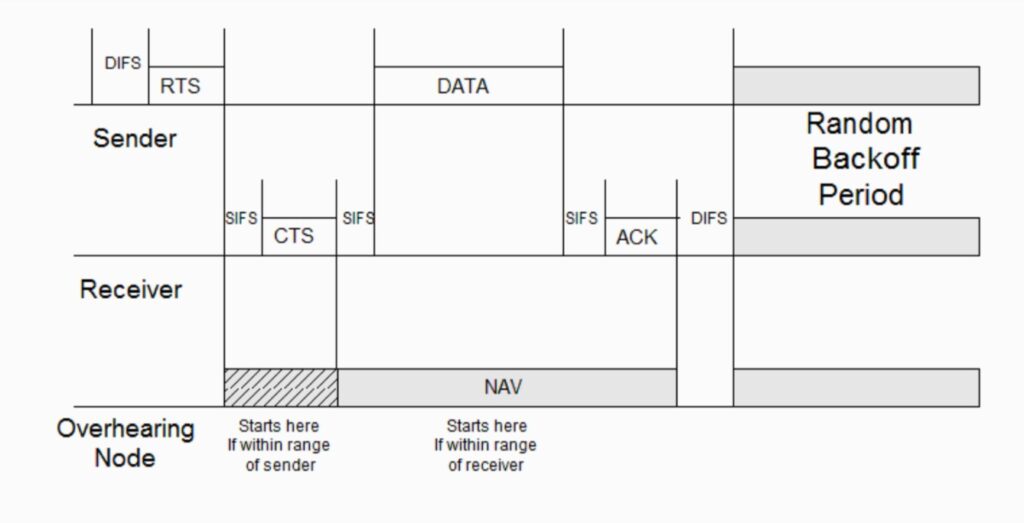 Cat 4 LBT scheme is sought to be most favourable when it comes to deployment of Licensed Assisted Access, LAA framework in coexistence with WiFi network. Cat 4 or Category 4 LBT uses Enhanced Distributed a Channel Access (EDCA) method to resemble LTE network as WiFi network, thus using the existing 5GHz band easily. It is quite different from the LTE-U technique and removes the brute force method.

In this Markov chain model, with a virtual scheme, we consider that users of all systems access their network through distributed access points. All these access points will be controlled by a central control mechanism. For the coexistence of both LTE and WiFi networks, we also consider a virtual network entity. This entity holds good for software-defined wireless networking scheme. This can now control both LTE LAA network and WiFi network. The Cat 4 LBT scheme controls the LTE signal, and hence the LTE network resembles the WiFi network. Also, the Distributed Coordination Function scheme of WiFi controls nodes for transferring of network and thus allows coexistence of both LTE and WiFi networks. The control plane is one and remains the central control framework while data planes of LTE and WiFi are considered to be separated and it is considered that data will be forwarded independently instead of co-channelling them. Also, duty-cycles are used to access each channel. In this specific model, at the end of each duty cycle, the time frame gets divided into two phases one for each network. For the first phase, anyone (let’s say) WiFi users can access the channel and transmit their data packet using a p-persistent CSMA. While, in the other phase, any LTE user can transmit their data but in the TDMA scheme. This architecture can help each network to use its own MAC protocol and each user can only compete with their own kind of user. This means that LTE users will only compete with other LTE users and so will happen with WiFi network users. Thus, coexistence is maintained.

When the system was subjected to provide, the analysis was done on following two model systems:

The first analysis is the throughput of Evie system. The throughput comes to be higher of WiFi system having 3 APs than that with 6 APs. Here, the contention is higher with the increasing number of Access Points. While we compare this against throughput of WiFi & Cat 4 LBT LAA which uses 3 eNBs, we find it to be a good neighbour. Overall, this throughput of the coexistence system of LTE and WiFi comes out to be much better than that of WiFi alone! [10] 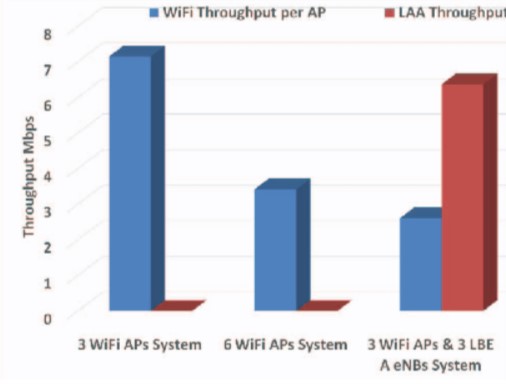 For the third figure which is a plot of transmission delay, it is evident that the WiFi system with 3 access points has the minimum delay. The WiFi system with 6 APs has nearly doubled delay and the Cat 4 LBT LAA system has a slightly larger delay than the single WiFi system. [10] 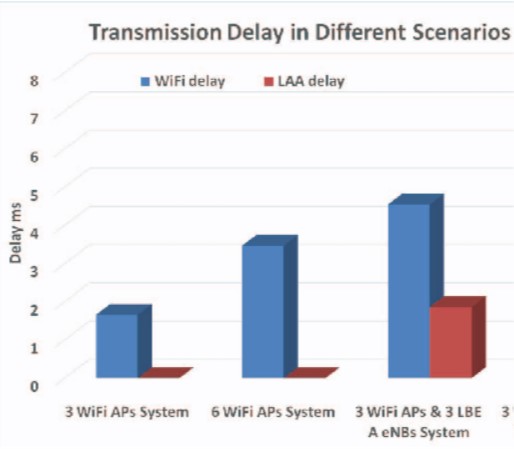 From the above three plots and analysis, the WiFi system which had coexistence of Cat 4 LBT LAA eNBs and WiFi had the best performance of WiFi, both in terms of Transmission delay and also the throughput.

The above coexistence system can help for now, but for further development of future needs, proper allocation of users is necessary. This allocation of users must be done within WiFi access points and in the range of LAA eNBs. For future works, more realistic data and conditions must be utilised for better development of this Markov chain model. [10]

As per above model of utilisation of Category 4 LBT LAA scheme is best when used with Distributed Coordination Function scheme of WiFi networks. Also, when we utilise a coexistence system, a trade-off is necessary between the protection of WiFi networks and the overall performance of the LAA system. The Markov chain model of throughput established above is greatly helpful regarding the coexistence system. These results are very much real with the existing simulations.

Looking for best IT Management Assignment Help. Whatsapp us at +16469488918 or chat with our chat representative showing on lower right corner or order from here. You can also take help from our Live Assignment helper for any exam or live assignment related assistance.