Founded in 1986 Emisphere Technologies, Inc. [1] is a market leader in converting injectable therapeutics into formulations for oral use. Emisphere is a company which competes with drug delivery companies to make a competitive brand in the market. The company generally moves into partner agreements with other companies in the drugs and medicine segments and lends its proprietary drug delivery technology and license Eligen B12. It has been in the market for more than thirty years now. The core competence of the company lies in its research and development department which works to keep the company a market leader in terms of technology and drug delivery solutions.

They are able to develop and manufacture a number of fully characterized carriers with an amazingly extensive library [2]. The partners of the company utilise its unique intracellular delivery mechanism to combine with their own products and create unique extensions to their already resent product lines and achieve a market advantage. The company is able to provide a quick and early proof of concept and able to develop on those products and provides commercial capabilities as well.

The company works with both kinds of products, the ones in pre-market phase and the ones which are already thriving well in the market. In addition to that the broad-based proprietary oral drug delivery platform provides significant increases in bioavailability, which at the same time is also able to enhance the absorption of small and large molecules of the drugs without changing the chemical forms of the products.

Thus, the major segment/all of the client segment of the Emisphere is in the form of majorly partner companies which are utilising its technology to enhance their products. The company server its clients in USA majorly.

The core company has about 51-100 employees [3] and operates out of USA itself with its headquarters in the great New York area. There are a number of products of the company that are currently in the pipeline. A careful consideration goes in the company before a decision of devoting the resources in the company on a product is made. There first criteria that the product has to clear is that the market in which the company wishes to enter should be sustainable. The Company also considers the level of product development effort that it needs to invest in relation to the output that the company can expect to receive from the product.

Current coordinated effort with Novo Nordisk to create Oral GLP-1 Analogs and Oral Insulins for Type 2 Diabetes. December 2010, the Company went into a restrictive Development and License Agreement with Novo Nordisk to create and popularize oral plans of Novo Nordisk’s insulins utilizing Emisphere’s Eligen Technology (the “Insulin Agreement”). In June 2008 Emisphere and Novo Nordisk went into a selective Development and License Agreement for the advancement of oral plans of GLP-1 receptor agonists. GLP-1 is a characteristic peptide hormone engaged with controlling glucose levels. Oral semaglutide is currently in Phase III preliminaries for diabetes. Ten preliminaries selecting 9,600 patients are arranged as a component of the Phase III program. As of February 2017, Novo Nordisk has now started every one of the 10 Pioneer clinical preliminaries. Novo Nordisk is utilizing our Eligen medicate conveyance innovation in blend with its exclusive GLP-1 receptor agonists and insulins, just as four different particles with an end goal to create oral adaptations of these drugs. This all-encompassing association with Novo Nordisk can possibly offer noteworthy new answers for many individuals with diabetes worldwide and it likewise serves to additionally approve our Eligen Technology.

Other companies that Emisphere Technologies has collaborated with are Roche, Regeneron, Novartis Merck, Lilly, Elan, Bayer, Amgen etc. Now we move on to the visualisation of the network diagram of the company. 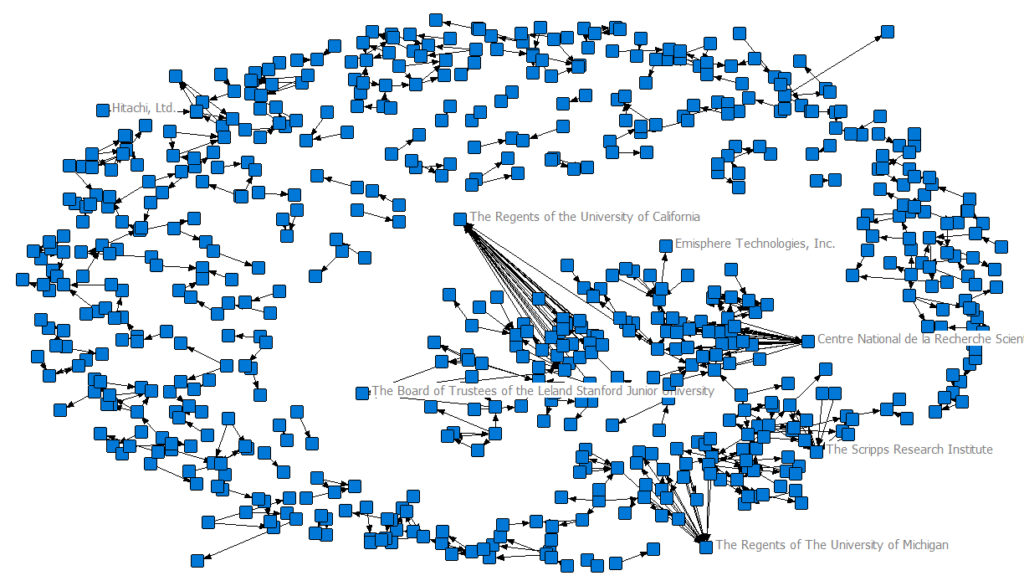 Figure 1 is the raw network diagram of Emisphere technologies. We can see that there are few segmentations in the network diagram however it seems to be a long-elongated network of many nodes combined to form the network ( the circular structure is just the representation, notice the movement of the diagram from centre to bottom right and then clockwise ). Further the segmentation of the network can be analysed using the component analysis. 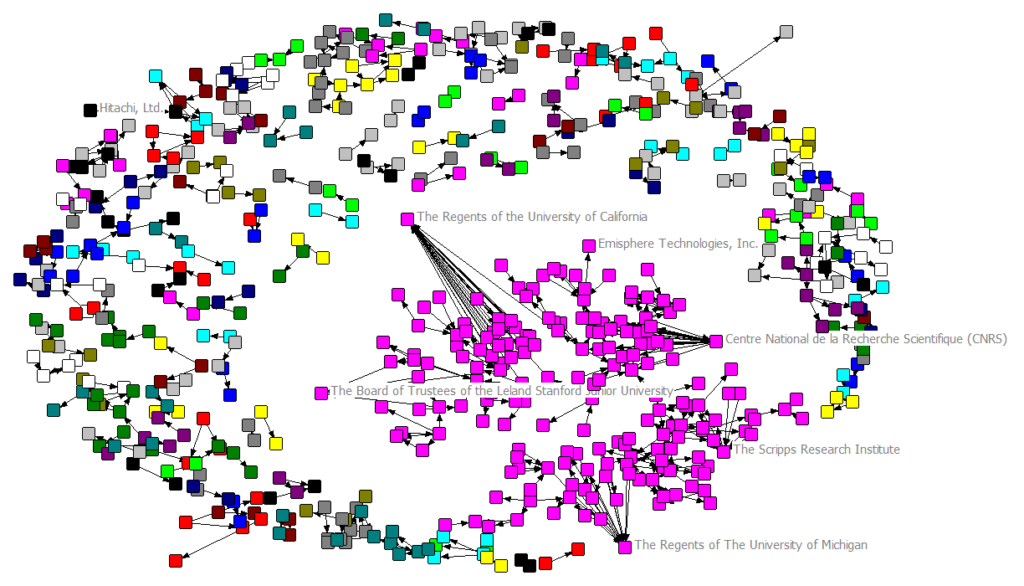 We can see the largest component in figure 3 below and that indeed contains Emisphere Technologies. We can see several nodes with large number of edges indication high centrality measure in terms of Degree. The network edges grow almost exponentially about two to three edges away from the main node of Emisphere technologies. 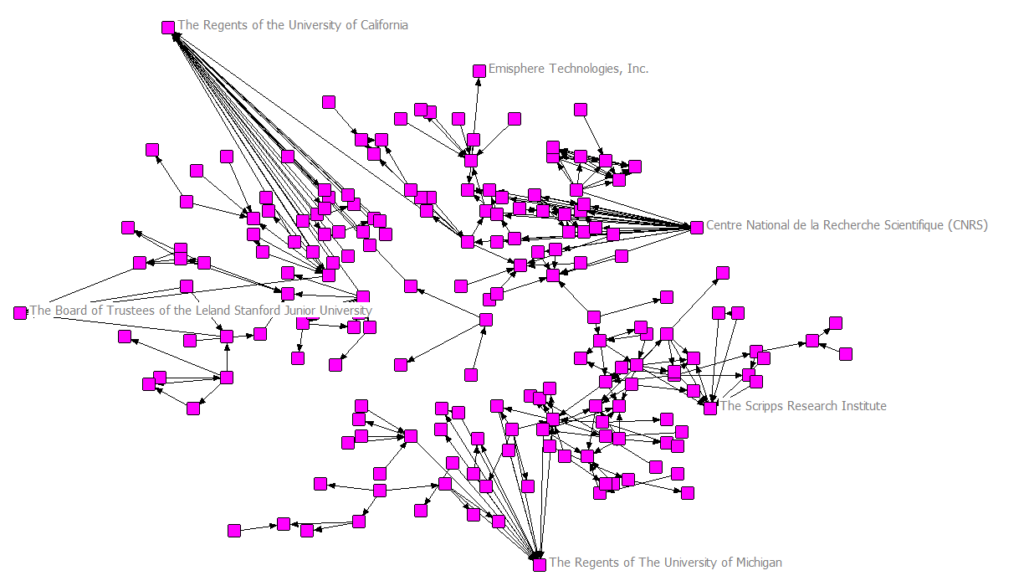 Hence, from this point we move forward to a k-core analysis with the visualisation of the centrality of the nodes as well to understand the network further. 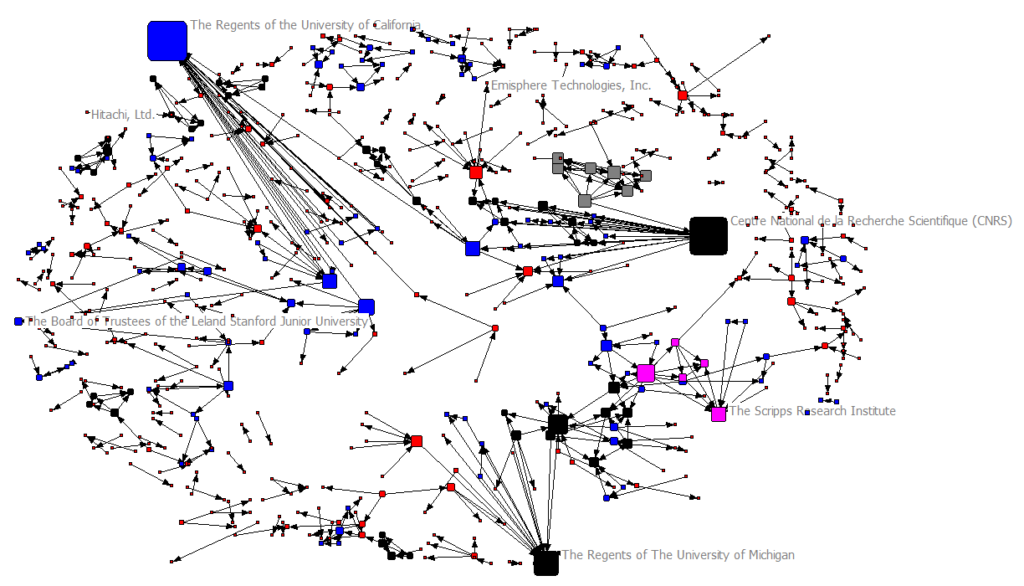 The above figure shows the analysis where the degree is represented by the size of the nodes whereas the colour represent the core number. Emisphere technologies being the prime node has a low degree, but it is connected to the node with a much higher degree. There are multiple nodes with high degree and thus, in turn centrality. The k-core analysis shows how the cores are connected and the graph forms a very smooth distribution system which is a major attribute of the partner network that Emisphere Technologies follows. We can clearly see the major nodes which are important in the partner structure of the company.

From degree and k-cores we move to country codes and k-core analysis.

We have represented the k-core analysis by the size of the nodes whereas the country codes are represented using colours. Figure 5 clearly shows that the company is majorly situated in USA itself due to the fact that it is mostly in the same colour. There are some nodes with other colours except for USA which shows its presence in other nations as well. However, it can be safely said that the presence of the company outside USA is negligible. And outside North America is even less. However, the k-core analysis seems inadequate for the company here and hence we switch to a centrality measure. 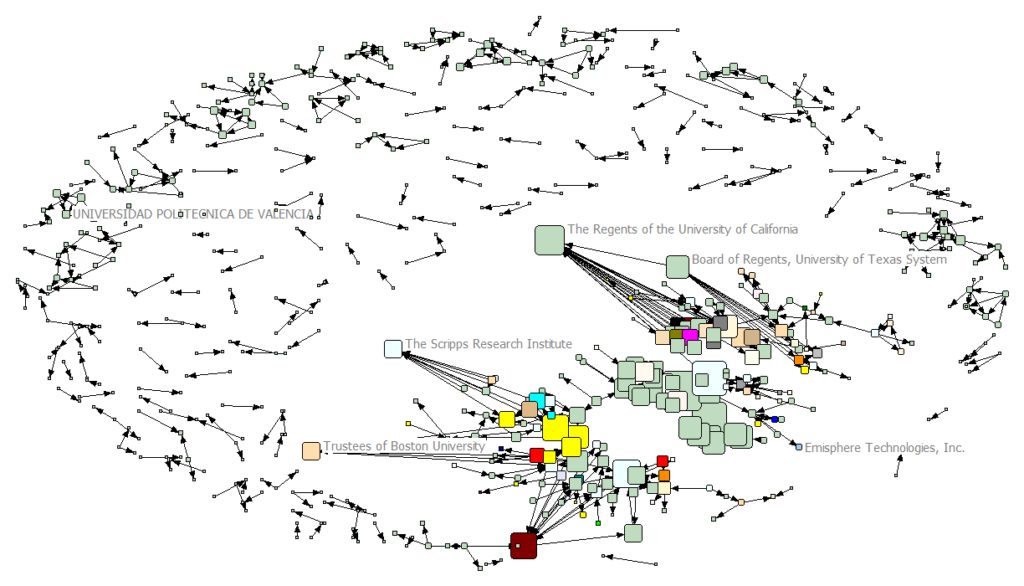 The above figure separates the size of the nodes based on the 2-local eigen vector value of the nodes which represents how good the node is connected to other nodes and the turnover lay data of the nodes is represented by the colour of the node. The grey colour is the representation of the missing turnover data/where turnover data for the company is irrelevant for that node. We can see the direct network of Emisphere technologies has high centrality measures in terms of eigen vectors. Rather the nodes near Emisphere Technologies are the only ones which have a high eigen vector value. As we move away from the node the value decrease, decreasing the centrality along with it. There are multiple sources of turnover for the company as seen by the colour changes all around the parent node. We further try to analyse how the current employees contribute to the turnovers of the company in its network, keeping the measure of centrality constant and changing the source of colour from turnover lay to employees. 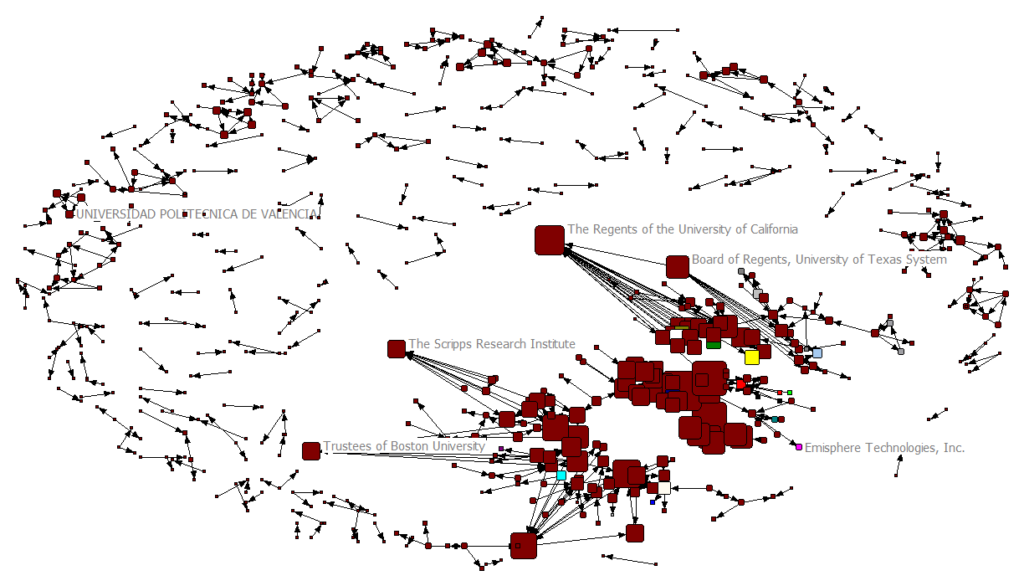 When we change the centrality measure to betweenness in figure 8 we have a much more compact centrality visualisation. We can see that the betweenness value is high only for a limited number of nodes in case of the company. None of those nodes have employees of Emisphere Technologies working. Showing a high dependence of the company on its partners. 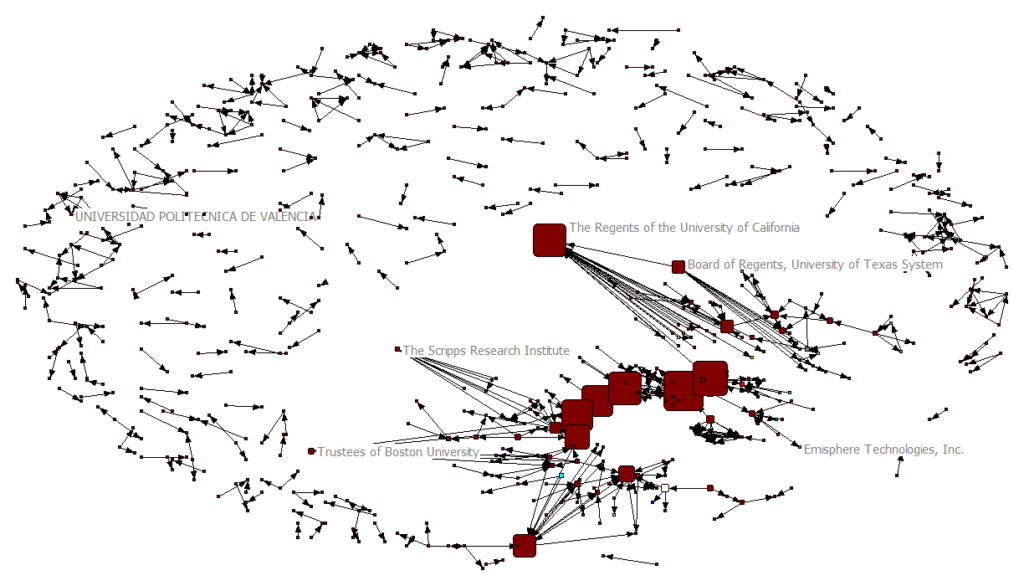 The company faces risk in its innovation strategy majorly from the fact that the model can be copied by other companies. The proposition of the company lies in the proprietary technology it uses to convert the drugs into oral drugs [5]. If another company is able to copy that potential of the company, then Emisphere technologies will lose its competitive advantage in the market.

The largest risk that the company faces for its innovations is in terms of the industry itself. The very first is the risk of its proprietary technology becoming redundant in the scenario of introduction of a better technology that can turn drugs into oral drugs in the market [7]. At the same time the partners of the company can realise that they do not need the technology anymore as their drugs do not see any advantage from such products. That is very much visible in the network analysis done above which shows that the company almost completely depends on its partners to generate its turnovers which will disappear with reduction in the number of partners.

Overall the speed of technology in the industry is the biggest risk to its innovation. In simpler words the risk of someone else innovating before Emisphere Technologies in the same domain will lead to the largest risks for the company and possible loss of business as well. The company constantly needs to innovate and stay the market leader in its segments.