To perform a preliminary valuation, Liedtke developed a base case set of financial projections based on forecasts of revenue and operating income for each of Mercury’s four main segments as shown in Exhibit 6. Liedtke’s base case assumed that women’s casual footwear would be wound down within one year following an acquisition, as he doubted that WCF would be willing to sell Mercury without it. He further assumed that Mercury’s historical corporate overhead-to-revenue ratio would conform to historical averages. To accompany the operating projections, Liedtke prepared projections for certain balance sheet accounts for Mercury, shown in Exhibit 7; these corresponded to operating assets and liabilities that Liedtke expected would be required to support his operating projections. He did not prepare projections for debt or equity accounts since Mercury

likely would not have its own balance sheet and capital structure following an acquisition by AGI. To estimate a discount rate, Liedtke planned to assume the same degree of leverage for Mercury that AGI currently used, which he estimated to be 20%, measured as debt divided by the market value of AGI’s invested capital. Given current credit market conditions, he expected this degree of leverage to imply a cost of debt of 6.0%.4 Finally, his analysis would assume a 40% tax rate, equal to AGI’s anticipated marginal tax rate.

After examining Mercury’s value using the base case assumptions, Liedtke also wanted to consider the value of possible synergies. Specifically, he believed that AGI’s inventory management system could be adopted by Mercury at little incremental cost and would reduce Mercury’s DSI to the same level as AGI’s. In addition, he thought it was possible that Mercury’s women’s casual footwear line could be folded into Active Gear’s, rather than discontinued. In that case, he thought the combined businesses could achieve an EB 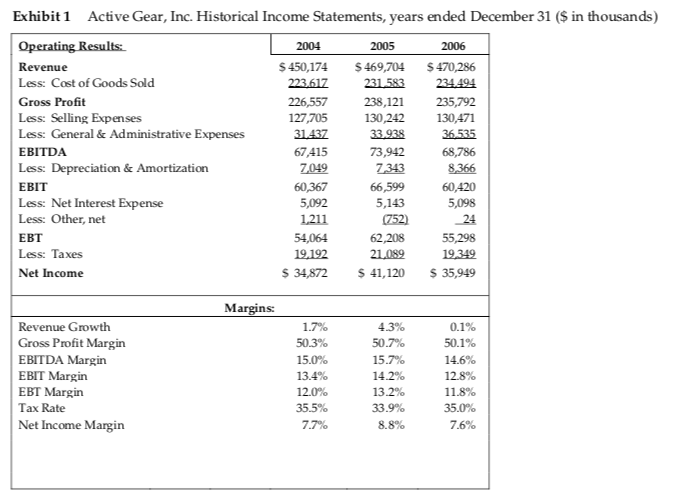 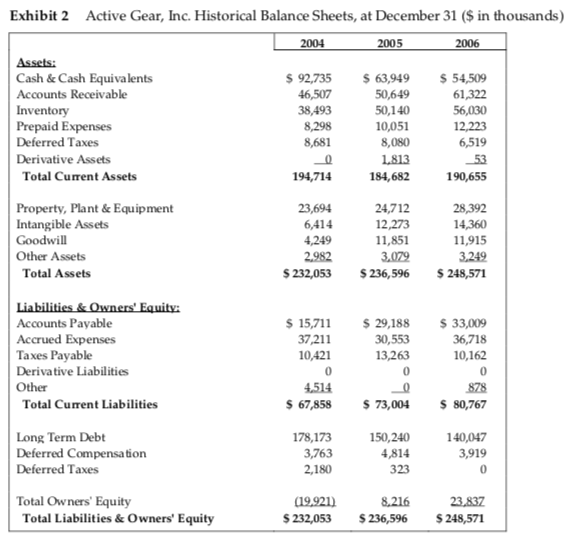 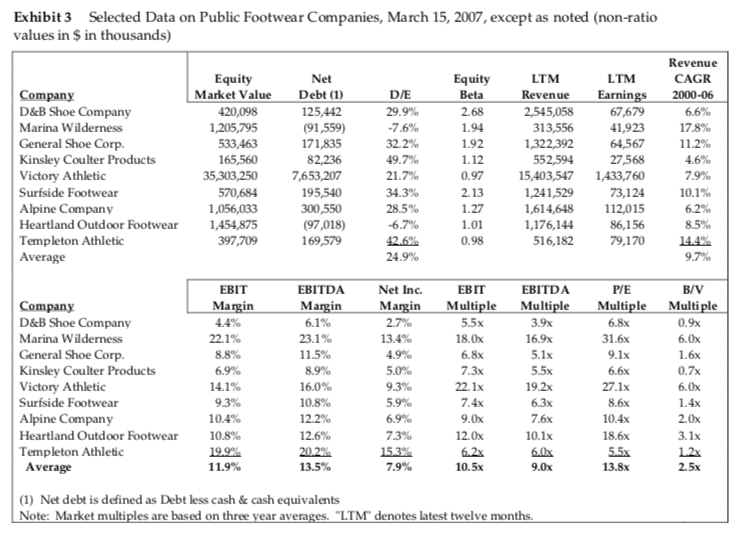 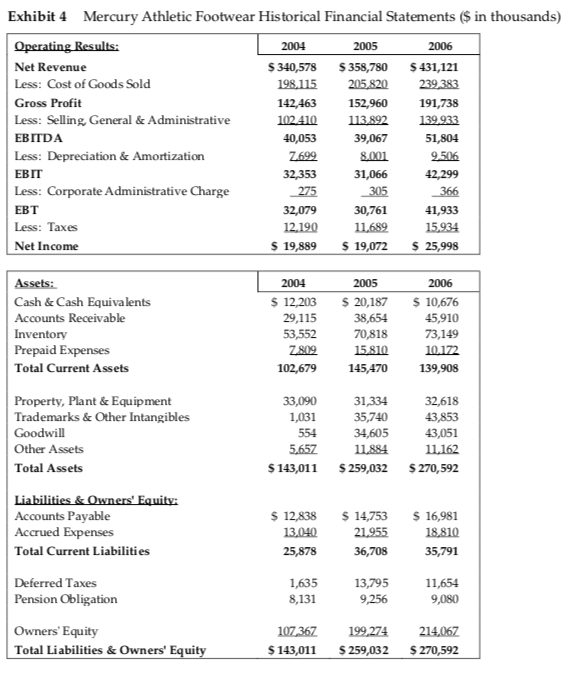 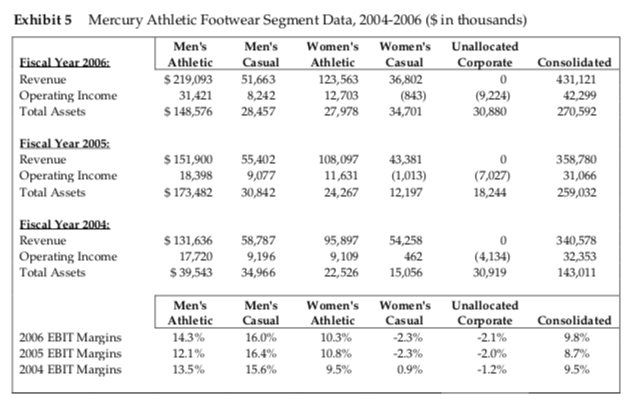 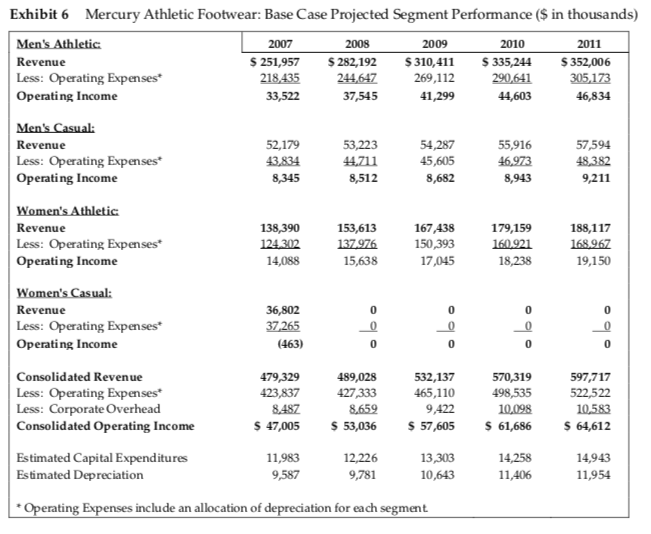 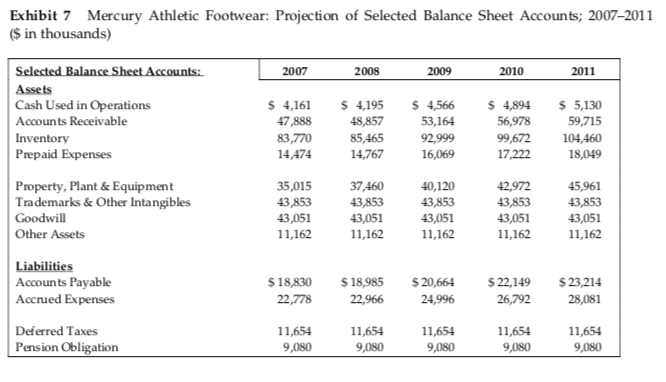 Both the companies belong to the footwear industry which is a highly competitive industry in itself. The margins in this particular industry are very thin and for higher profitability the company depends on scaling up the sales of the product. Also, customer’s brand loyalty plays a very important role in this industry. This is because the fashion is continuously changing at high pace and it puts pressure on the company to be able to deliver what customer wants. If the company is not able to deliver on time than the customer will move on to its competitor.

Also, in this particular industry every brand, style of the footwear and their use have their own customer base. So, a company specializing in one particular design or use would have characteristic of that particular market. A united company which has presence in multiple brands will have more stable performance results than a company dealing in one particular brand.

Also, margins in this particular industry are highly dependent on the inventory management by a particular company. If the company is able to keep its days to sale inventory ratio low, than it has chances of earning higher returns.

AGI was founded in the year 1965 which produced high quality tennis and golf shoes. At the beginning of the year 1970 AGI moved into casual footwear thus diversifying their business. As in the year 2006, more than 42% of the AGI’s revenue came from athletic shoes which were sold via 5700 of stores. AGI did not sell through big box discount stores. Recently, AGI has started facing the problem. Being a relatively small company AGI was losing its competitive advantage specially because of consolidation of manufactures in china. Also, company’s policy not to sell through big box discount stores has been a major factor of reduced revenue growth rate in the recent years.

Mercury Athletic footwear is a subsidiary of the West Coast Fashion. The company mainly deals in four major categories of product, Men’ Athletic Wear, Men’s Casual Wear, Women’s Athletic Wear and Women’s Casual Wear. They basically aim at urban and youth market which is one of the most lucrative market in this particular industry. The target customers of this particular company are from the age 15 to 25. Also, mercury does not discriminate its sales channel. It is sold through departmental stores, speciality retailers, wholesalers and independent distributors.

For the purpose of valuation first thing is we are required to calculate the working capital requirement of mercury over the coming years. Working capital is the most important thing in this particular industry. This is because the margins in this industry are very less and poor management of working capital would result in reduced profitability.

Once the working capital requirement was calculated, rest things were already given in the case from which could calculate the cash flows of the company

Given the synergies and positive NPV’s at all the possible scenarios, AGI should go ahead with the acquisition of the company.

Looking for best Finance Assignment Help. Whatsapp us at +16469488918 or chat with our chat representative showing on lower right corner or order from here. You can also take help from our Live Assignment helper for any exam or live assignment related assistance