Formula use to value mercury 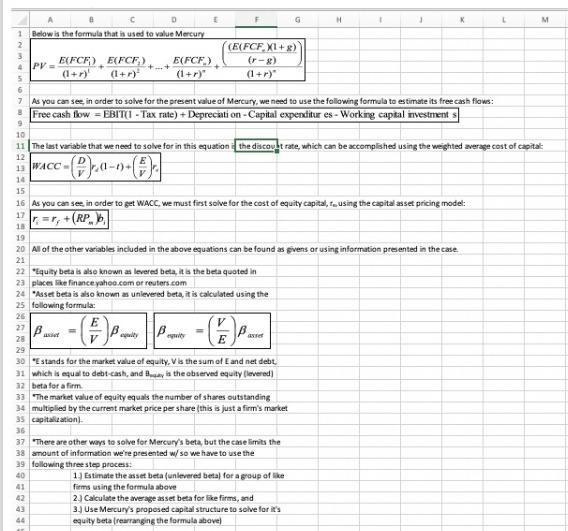 The business heads of Active Gear Inc. have been comprehending the acquisition of Mercury Athletic Footwear for annexing their operations in the AGI brand. While AGI has a higher amount net income margin even Mercury Athletic is not far behind in terms of the net income margins. Being primarily in the Men’s footwear segment the company holds a decent command on its market due to high customer loyalty.

The company has also been able to leverage simple designs and cheap manufacturing levels by maintaining its operations. Where other companies generally focus on designs, the focus of Mercury Athletics on operations has led it to achieve some of the better margins of the industry.

Here it is important for the business heads of AGI to value the company properly to understand the risks associated with the purchase of the company.

The company was previously valued using the free cash flow method but a WACC was used that was between the market range instead of the actual company WACC. We now estimate the WACC of the company based on the financials it had in 2006 as a stand-alone company.

The average asset beta along with the capital structure of Mercury (20% leverage) was used to calculate the equity beta of the company. Further the risk-free rate is taken equal to the terminal growth rate of 3% and the market return is taken equal to the income margin of 7.86% giving a market risk premium of 4.86%. this leads to a cost of equity value of 10.8%. Other values used are as follows:

Based on the WACC the following are the valuation calculation:

Based on the fact that there might be further possible synergies with AGI it was estimated that Mercury will be able to revive the Women’s casuals’ brand where the revenues will grow with the market revenue CAGR whereas the operating expenses will stay the same. Based on that the optimistic value of the company is as follows:

The value of the company will increase by more than 25% if Mercury is able to revive its women’s brand and acquiring the company for the base case valuation will then prove to be very profitable investment for the company.

We can see that the range of company valuation from the comparable multiples’ method is from $ 3,59,061.27 to $ 5,44,681.59. The average company value of $ 4,52,718.99 is very close to the valuation that we received from the WACC valuation method and much below the valuation that 8% of discount rate gave us. Thus, the calculation using the WACC seem to be appropriate and should be accepted going further.

Based on the valuation of the company is seems to be a good investment but AGI has to prepare for the strategic gaps that exist with Mercury currently. The primary advantage that both the companies and specially AGI will gain is the consolidation of resources. Both the companies excel in a few things. Mercury has a brilliant distribution channel that will be leveraged by AGI and thus, this will lead to a decrease in costs and increase in the margins for the new bigger company.

At the same time AGI is better at inventory management which will help Mercury reduce its days of sales in inventory and increase its margins. The companies will also not cannibalise much of each other’s markets as they have a separate target customer group.

Looking for best Finance Assignment Help. Whatsapp us at +16469488918 or chat with our chat representative showing on lower right corner or order from here. You can also take help from our Live Assignment helper for any exam or live assignment related assistance