The U.S. Earned Income Tax Credit (EITC) has been described as one of the most successful elements of U.S. antipoverty public policy, especially as it directs benefits toward the working poor. For the 2010 tax year, the EITC worked (approximately) as follows. Low-wage workers received additional income from the federal government, depending on how much they earned and how many children they had. Consider an individual with one child:
• There was no credit if nothing was earned.
• The credit equalled $0.34 per dollar earned, and peaked at around $3050, when the worker earned $8950.
• It remained at $3050 until the worker earned around $16,450.
• It was phased out gradually, by $0.16 per dollar earned, until eliminated completely if the worker earned $35,535 or more per year.
(a) Assuming the worker faced no other taxes, graph the budget constraint associated with the EITC for a typical worker earning W per hour.
(b) Analyze how the imposition of the EITC affects hours of labour supplied. Assuming that substitution effects are larger than income effects for the typical low-wage worker, does the credit necessarily increase hours of work for all those who are eligible? Why or why not?
(c) Analyze the impact of the EITC on an individual’s labour force participation decision, assuming that the individual was not working in the absence of the EITC.
(d) The Canadian IETC-type program, the Working Income Tax Benefit (WITB), provides no credit until labour earnings reach a minimum of $3000 . The benefit is then calculated on the basis of “earnings minus $3000.” What would happen to the work incentive effects of the EITC if a similar $3000 threshold was added to the EITC
(holding everything else constant)?

Using the economic theory of fertility, analyze the expected impact on the TFR (total fertility rate) and women’s labour supply of the following:
(a) An increase in women’s wages.
(b) Elimination of the family allowance for high-income women.
(c) An increase in the deduction for child care expenses.
(d) Increasing educational levels for women.

4. In a labour supply model with taxes the after tax wage is equal to (1−t)∗w, where t is the marginal tax rate. Suppose that the government is considering increasing the marginal tax rate.
(a) What is the likely impact of this change according to the static labour supply model? Use a diagram to illustrate.
(b) Suppose now that some government officials believe that the tax increase will only be needed for a year as sufficient funds will be raised to fund an important project. Other officials believe that the change will have to be permanent. Using a dynamic model of labour supply, discuss the relative impacts of the transitory versus permanent tax increase.
(c) How do the results in b) compare to those in a). 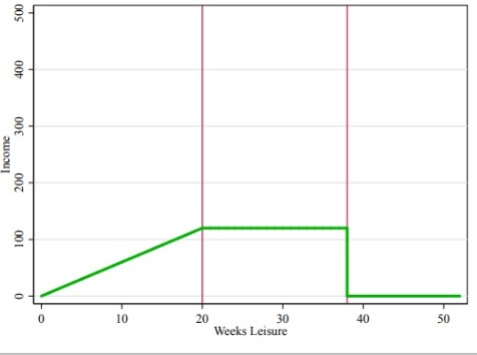 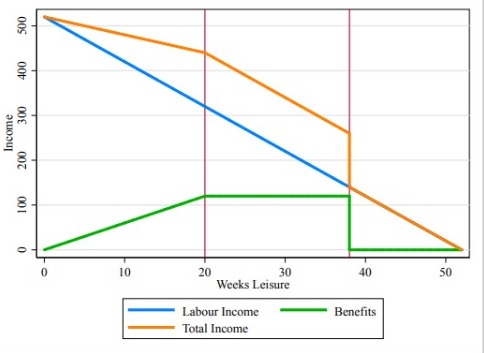 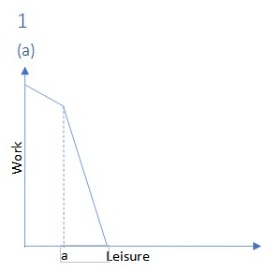 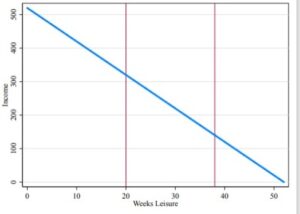 In the diagram above an individual will be indifferent between welfare and work as he loses the same income as much as the leisure that is gained and vice versa. Thus there is complete indifference between both. 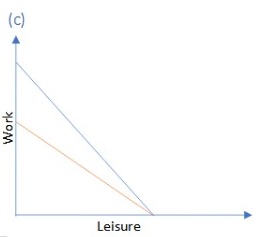 The diagram above shows an increase in wage. As the wage of the person increases her work leisure curve moves from orange to blue. Here a decrease in leisure amounts to a larger gain in income than before and thus the increase in wage induces her to move off welfare. 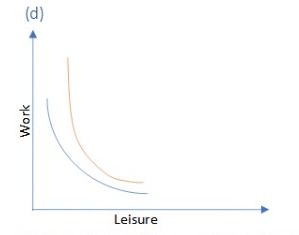 As the preference of a person changes from a work leisure curve coloured in blue to orange, they find the payoff more in switching to work and less in welfare and thus, they move off welfare due to change in preferences. 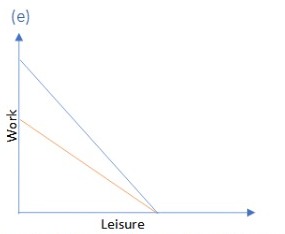 As the implicit tax changes the work leisure curve shifts from orange to blue. Here a decrease in leisure amounts to a larger gain in income than before and thus induces her to move off welfare. 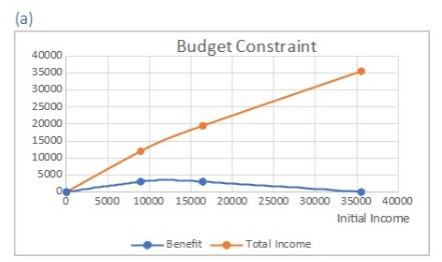 From the graph it is visible that if the individuals prefer benefits more than they will work lower hours as the benefits are higher in that range. The credit will not increase the hours of work if the low wage workers are already working in the range where the benefits start to decrease. In that case the number of hours worked will rather be decreased. On the other hand, for the workers working for very low hours the time spent by them will increase to take benefit of the increased credit.

EITC’s decision will increase the effective wage rate for an individual by 34% in the initial hours if he was not initially working. Thus, the policy will induce him towards working to the point where the benefits cap-off.

The graph will change as the following: 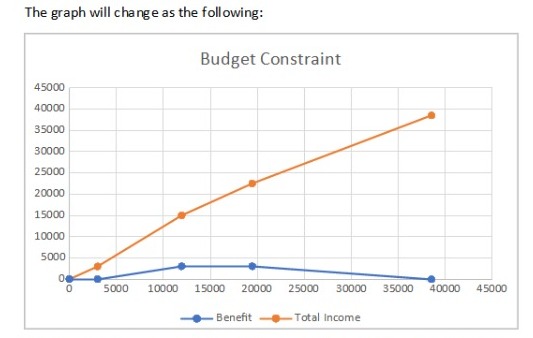 The effect of the policy should be positive and should push the labour force to work higher to reach the benefit slab thereby increasing the net working hours of the force by 3000/W hours.

As the women’s wages increase there in an increase in the net household income and thus the families will be able to support more children. Assuming the cost of children will remain the same there will be an increase in the total fertility rate and the supply of women labour force.

As the family allowance is removed for high income women, there will be less disposable income to raise children thus, it will lead to a decrease in the total fertility rate. However the women’s labour supply should not be affected as this is a removal for a section which might push them to work less, but not stop working.

The increase should decrease the total fertility rate as more children will mean more deductions. At the same time this should also increase the labour supply due to increased time with women due to a decrease in the population of children. 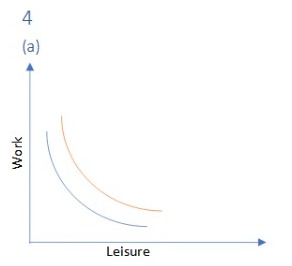 The effect of increase in the marginal tax rate is shown above. The curve moves from orange to blue. Now for the same amount of leisure there will be less total income. Thus, is there is a minimum basic need for a labour worker then he will have to work more to achieve that income. Thus, the overall impact should be that there is an increase in the labour supply.

The first-year effect will be same in either case. If there is a transition back to old tax rates, then for any individual the effect will be same as an increase in the income and by now they will be used to a low leisure life. Thus, this will have an effect of increased perceived leisure from individuals and will induce non-working individuals to work due to an increased net income effect. On the other hand, there will be no such effect if the tax rate increase in permanent. The new population will start to go back to leisure with lower required income levels.

The results in (b) show a futuristic outlook compared to a static outlook in (a). This helps the policy makers to take a much better decision. For example, if the decrease in tax rate the next year increases the working population then the tax income will increase from the new labour force which will offset the decrease in the tax rates.

Looking for best Economics Assignment Help. Whatsapp us at +16469488918 or chat with our chat representative showing on lower right corner or order from here. You can also take help from our Live Assignment helper for any exam or live assignment related assistance.